Cultivating critical thinking and constructive dialogue in relations between the United States, the European Union and the Russian Federation is challenging work. Even before the events of 2014, the levels of mutual suspicion and competition were high and rising. Then came events in Ukraine, the protests that toppled a democratically elected government, the seizure of Crimea and what followed. One hesitates to describe these events since the very words we use place them within very different narratives. 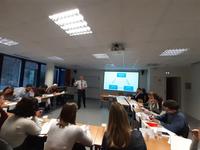 Did Crimea join Russia after a referendum in which the people of the peninsula exercised their right to self-determination and freely voted to return to their historic motherland of Russia? Or was Crimea annexed by the Russian Federation, and dissenters suppressed and driven out? On 2 March 2014 German Chancellor Angela Merkel told US President Obama by telephone that after speaking with Mr. Putin she was not sure he was in touch with reality. “In another world” she was reported to have said of President Putin. Two realities, two worlds. And it only got worse.

The United States has been in turmoil ever since real estate mogul and reality television star Donald Trump was elected President in November 2016. Like all shock events, this unexpected development gave birth to many conspiracy theories. One of the most insidious is geopolitical, the suggestion that ‘Putin elected Trump,’ that Trump is a foreign agent and Russian orchestrated influence campaigns made the difference in his election. This suggestion brought already entrenched US political partisanship to new heights. Trump’s ineptness leading the country strained transatlantic relations and eventually triggered an impeachment trial. One of the key protagonists in that drama, Fiona Hill, recently remarked that “a lot of this problem is in our own domestic politics. We have politicized the issue of Russia to a point that we can't have a sensible conversation about it.”

This is the background against which the University Consortium Fellows – talented students at universities in Russia, Europe and the United States -- met in Paris in January 2020. We had in our workshop both what we needed -- serious students open to learning – and what we wanted to study – the perspectives each student carried, the reason and emotion they held about the strained geopolitical relations between the US, Europe and the Russian Federation. Critical thinking moved us forward. We began by discussing geopolitical cultures, the worldviews each of us are socialized into by virtue of living in a certain state, being schooled there and surrounded by a media ecology that organizes the world for us in certain predictable ways.

Geopolitical cultures are not homogeneous, but they are situated ways of seeing that are structured by the power elite within states. It is not too difficult for them to produce very different visions of reality, to leave some, in the opinion of others, in another world. In doing so, we sought to appreciate facts, empirically verified occurrences, and how we needed these as common anchors. But we also sought to recognize affective facts, the power of memories of past humiliations and present traumas. What was it like to grow up in Russia just after the collapse of the Soviet Union? What was it like to live in Tbilisi as your country was being bombed and invaded in 2008? How do Russia’s military actions look from the United States? Facts are stubborn things which we should all recognize. But we also need to recognize that what we see and how we see it are conditioned by the emotions coursing in our geopolitical cultures.

We also spent some time discussing geopolitical fields, and one particular feature of them in post-Soviet space. These are the contested territories the emerged between newly independent states, the regions that broke away from a ‘parent state’ (their legal location) with or without the help of a ‘patron state’ (usually Russia but Armenia in the case of Nagorny Karabakh). Time prevented detailed discussion of these territorial disputes but, applying the insights from earlier session on geopolitical cultures, we were able to approach an appreciation of the very different worlds seen by protagonists to these conflicts. One thing we certainly did was banish the term ‘frozen conflict’ from our vocabulary. 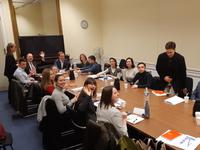 The Paris workshop itself now seems like another world, a pre-pandemic dreamland where people from very different backgrounds held free, open, earnest conversations about contentious geopolitical issues. We all had the great privilege of listening to some fantastic speakers on contentious issues and exposure – in the friendly sense of organized seating proximity for the students -- to them over food afterwards.

The third principle that University Consortium seeks to promote is mutual trust. Time will tell whether we got there. But I do know this. Critical thinking and constructive dialogue left us much closer to this than when we started.

Our world manifestly faces a great number of common dangers and security challenges. We need the rising generation of leaders to be exposed at a young age to their peers in other countries. The coronavirus reminds us of our shared human vulnerabilities. Geopolitical cultural bubbles do not protect us. Indeed, without exposure to the perspectives and experiences of others, they may endanger us all.

School of Public and International Affairs,