I approached the University Consortium with the intention keep an open mind and try to overcome my personal preconceptions and world views. At the opening seminar, Julie likened this to the international space station, and said that we should try to transcend our national perspectives and view Russia-West relations from above. From this I assumed we would focus on facts. I imagined we would overcome the narratives of different countries by focusing on events that were indisputably the case.  To start understanding each other, we would bypass irreconcilable arguments about world views and first rely on those things that are understood by both parties. Interventions, treaties, and other foreign policy actions, I thought, are clearly seen by both sides.

However, as the discussion got underway, I realised that I had vastly overestimated the size of this arena of agreement, and furthermore, began to realize that facts were fundamentally building blocks for narratives. We fell into traps of “what about-ism”, where discussions of intervention in Georgia and Ukraine by Western delegates were quickly met with Russian counterarguments of Kosovo  and Libya. My immediate instinctual response was “but that was different!”, and suddenly I found myself back in the realm of discourses, narratives, and national viewpoints. As discussions approached arguments, “facts” were clearly not the way forward.

As we listened to speakers, the perspective of the conference shifted from discussions of events to a discussion of discourses. The international relations theory focused heavily on constructivism, over realism or liberalism, and we were forced to question the roots of modern narratives. We discussed Russian, American, and European conceptions of sovereignty and security and the relation of these themes to issues such as the post-Soviet stastes. Gerard Toal discussed the levels of ‘geopolitics’ and argued that, actually, you can argue with geography. This shift to narratives had three positive effects on discussion.

First of all, I saw a shift from finger pointing to introspection. Facts had led to the questioning of the actions of others, and accusations of the other parties wrongdoing. The discussion of narratives led people to share both their personal and their countries opinions. The tone of the conversation shifted from “but why did your country…” to “I think the perspective from my country is…”. This de-escalated disagreement because it removed the accusatory tone. 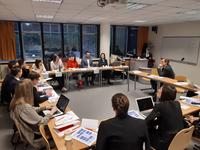 Secondly, it allowed for a greater understanding of personal biases. When the narratives were presented side-by-side, it showed the extent to which people commit to their regions world view. For example, while the Western perspective of the crisis in Ukraine was presented by Olga Oliker, I found myself nodding along, thinking that what she was saying made a lot of sense. When she presented the Russian perspective, I felt myself push back, thinking this perspective was clearly what the Russian state wanted people to think. However, I noticed Russian delegates nodding as she spoke, and it forced me to realize that as strongly as I believed the Western perspective is the “correct” one, they too believe the Russian perspective is “right”.  While I didn’t immediately accept their viewpoint, I realized that both perspectives are the result of narratives. I found myself thinking, if I had always conceived of sovereignty and Western intervention from the Russian perspective, would this explanation of events seem implausible? To varying degrees, I felt the UC fellows began to recognize their own biases.

Thirdly, a greater understanding of narratives allowed us to return to the “facts” in a more productive way. There were still many things we did not agree on, but the articulation of different perspectives meant there was less of a need to point out inconsistencies in the other’s narratives. Having established each other’s worldviews more broadly, I saw much more room for delegates to ask each other what their perspective was on specific issues. This, to me, was a fascinating part of the consortium. Even in situations where two delegates stood firmly on opposing sides of an issue, they listened and there was at least some understanding of the other perspective and how it fit into larger narratives. For me, this is the way forward in Russia-Western relations. 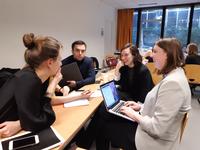 To be fair to the UC fellows, we fell into a trap that is continually seen in international relations. Firm viewpoints, informed by national narratives are often disregarded in order to focus on the pressing event or crisis. Resolution of crises fails as each side insists on their own view of events, and each poses solutions that are solely based on their own view of events. At the University Consortium, I learned it is possible to listen, understand, discuss, and progress even if you have opposing worldviews.