Track Two diplomacy has been known to break through the barriers where official political negotiations are largely known to stumble and fall. And though imperfect and frequently insufficient to achieve the necessary results on paper, a nuanced approach demonstrates that the interplay between national interests and the human factor can often lead to surprising breakthroughs, particularly in times of conflict where traditional dialogue is not only difficult but also impossible. We are currently living through a prolonged state of winter coolness between Russia and the West. Some call it Cold War 2.0, whereas others argue that the relations have plummeted to an entirely unprecedented level of mistrust, further culminating in blocked channels of communication and reluctance to hear the other side. Yet, where traditional means falter, the nontraditional avenues of communication and even cooperation, such as Track Two diplomatic efforts, can prove to be more productive than most skeptics would rush to admit. To this end, revisiting one such example from the Cold War days may be timely during a tumultuous period in the bilateral relations, whereby traditional means are not only insufficient, but, one could argue, are also serving as a major impediment to a successful conflict resolution.

On March 8, 1983, President Ronald Reagan famously branded the Soviet Union the “Evil Empire.”[i] In his speech, Reagan defended America’s democracy and Christian traditions against Soviet Union’s totalitarian leadership and lack of religious faith. The statement shocked many, amused some, but also inspired a few. One month after President Reagan’s iconic speech, at the peak of the global media frenzy centered on mutually assured destruction, a small-town American girl from Kennebec County, Maine would make headlines across the Iron Curtain. Six months earlier, ten-year-old Samantha Smith had stepped forward to defend her generation’s endangered future by writing to the newly minted General Secretary of the Communist Party of the Soviet Union, Yuri Andropov. In her letter published by Soviet mouthpiece, Pravda, she shared her fears about the impending nuclear war between the United States and the Soviet Union and asked the Politburo Chief if it was the Soviet Union’s goal to conquer the world or at least her country.

Although Mikhail Gorbachev is often credited for restructuring the USSR’s stagnating political and economic system through perestroika, the revisionist school of Soviet historians attributes his mentor, Yuri Andropov with the responsibility for the initial groundwork on liberal reforms.[ii] Judging by his political record as both the head of the KGB and later the Politburo, Andropov’s original plan for conducting these reforms was likely to have been less drastic and more constructive than those undertaken by his eventual successor, Gorbachev. Recently declassified archival material suggests that the particular timing of Samantha Smith’s trip to the Soviet Union in July of 1983 following President Reagan’s “Evil Empire” speech in March of that same year was conceived as a possible pre-perestroika project. It was likely meant to melt the ice between the Cold War rivals as a precaution against further escalation of the already strenuous relations

The American fifth-grader’s message to the newly appointed leader of the Soviet Union was immediately printed in Pravda. Within weeks, Andropov personally wrote to the young girl, calling her “courageous” and “honest,”[iii] and comparing her bravery to that of Tom Sawyer’s friend, Becky Thatcher. In his letter, the General Secretary confirmed that both the United States and his country hold “terrible” nuclear weapons that have the ability to “kill millions of people in an instant.”[iv] However, he emphasized that it is not the intention of the Soviet side to ever use these weapons “first against any country.”[v] Furthermore, Andropov added that the Soviet Union “proposes to discontinue” their further production, instead intending to proceed to the “abolition of all the stockpiles on earth.”[vi] The underlying message was clear: the Soviet leadership was prepared to engage in constructive dialogue—a dialogue, however, conducted on their terms. The correspondence was accompanied by an official invitation for Smith and her family to visit Soviet Russia in order to “find out” first-hand about the USSR, meet with her contemporaries, and, most importantly—to see for herself that in the Soviet Union, “everyone is for peace and friendship among peoples.”[vii]

During the carefully planned and thoroughly scripted two-week tour of Soviet Russia, Samantha Smith visited Red Square, attended a Russian ballet performance at the Bolshoi Theater, met the first female astronaut, Valentina Tereshkova, enjoyed an all-American lunch with burgers and fries in the company of then U.S. Ambassador to the Soviet Union, Arthur Hartman, and, most memorably, visited the Soviet youth camp, Artek, on the Black Sea, where she met fellow youngsters—Soviet girl- and boy-scouts known as the young pioneers. Due to a “mysterious”[viii] illness that, at the time, was strictly contained behind the imposing Kremlin walls (but would eventually take his life seven months later), Andropov was unable to personally welcome his young pen pal.

At first glance, Smith’s mission motivated by youthful goodwill and idealism was part of the meticulously scripted pro-Soviet propaganda conducted by the Kremlin officials as a way of granting the socialist country a “human face.”[ix] However, there is also a flipside to the same coin—“Samantha Smith” as a cultural project conceived and orchestrated with matching effort and involvement on the part of the U.S. government, specifically the White House and/or the Department of State as a means of spreading American soft power throughout the communist bloc. Was this cultural project an attempt by either Soviet or American—or perhaps both—sides to engage in political dialogue through citizen diplomacy? Primary documents from the Ronald Reagan Archives suggest that the White House and the Presidential Administration’s enthusiasm vis-à-vis Smith’s citizen diplomacy project paled next to the eagerness of the Soviet side to engage the American “Dove of Peace” in an effort to build a bridge of communication through diplomatic means. Through recently declassified memos and letters, it is clear that the Office of the President of the United States and President Reagan personally feared that the issues the U.S. and the USSR disagreed upon were far too complex to be subject to resolution with “a few bold diplomatic strokes.”[x]

An overnight sensation in the USSR, upon her return to the United States, Samantha became a regular guest on television talk shows, such as Night Line and Today Show, where she was celebrated as both America’s “pint-size ambassadress” and disparaged as a “dupe of Soviet PR machinations.”[xi] But her American reception paled significantly next to her triumph in the Soviet Union.

The legacy of Samantha Smith was immortalized by a fatal accident that took her young life just two years after the Soviet tour. On August 25, 1985, en route from filming a new ABC television drama, Lime Street alongside Robert Wagner, a Bar Harbor Airlines commuter plane carrying Samantha and her father, along with four other passengers and two crew members, crashed near a small airport in Auburn, Maine. To this day, questions surrounding her untimely death remain unanswered. The 13-year-old Goodwill Ambassador’s passing became a personal loss for the entire Soviet nation. In his open letter, then newly appointed General Secretary, Mikhail Gorbachev called Samantha Smith “a brilliant beam of sunlight.”[xii] Shortly thereafter, his government issued a postal stamp in memory of the “Young American Dove of Peace” and even named a mountain in Russia after the late child ambassador to commemorate her brave efforts during a tumultuous time in bilateral relations between the two adversaries.

The passing of Samantha Smith in 1985 created a sudden gap in the bilateral cultural exchange program. According to the Soviet news agency, TASS, Children at the Peacemakers Foundation asked the Moscow City Young Pioneers Palace to recommend a candidate who would carry Samantha Smith’s torch back to the United States. The request entailed finding a “child involved in anti-war activities who was no older than Samantha.”[xiii] Katya Lycheva, who at the time was studying at a Special English School No. 4 in Moscow, was selected from a proposed list of young peace activists of the International Friendship Club of the Soviet Union. Lycheva attempted to replicate Smith’s success by writing to—and eventually meeting—U.S. President Ronald Reagan. Yet, her success paled next to Samantha’s original triumph. In 1988, three years before the collapse of the Soviet Union, Lycheva and her family relocated to France, and from 1995 she worked in the Paris Foreign Investment Promotion Center. In 2000, Katya—now Ekaterina—returned to Russia to serve in the Ministry of Labor and Social Development of the Russian Federation, where in 2004, she became a member of the United Aircraft Consortium. Ekaterina Lycheva has since declined from making media appearances both in Russia and abroad.

While in her hometown the local press hailed Samantha Smith as “the girl who saw the truth,”[xiv] what made the story of the young peace activist appealing to the Soviet people was her perceived genuine intent at making a difference in spite of the ramifications of the bureaucratic system. Her efforts were briefly acknowledged and even celebrated by the American side. Yet, it was ultimately the Soviet Union that embraced the young ambassador’s journey to the other side of the Iron Curtain as a heroic act that granted “a human face” to the United States, while, simultaneously, offering her compatriots “a rare glimpse of the [humanized] Soviet Union.”[xv] 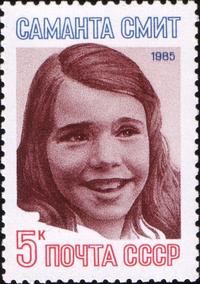 Lack of sufficient primary documents that verify whether the “Samantha Smith” project was conceived by either of the two rivaling states can be explained by two possible theories. On the one hand, it appears that the project was mutually beneficial for both countries that were on the verge of engaging in an unprecedented nuclear war. Therefore, in order to avoid direct confrontation without political compromise, they turned to Track II Diplomacy. On the other hand, the very fact that the circumstances surrounding the “Samantha Smith” project and her passing remain ambiguous at best may explain why, to this day, so very few of the primary documents have been fully declassified on either side. This factor may, in turn, reinforce the theory that Samantha Smith’s mission was equally beneficial for both U.S. and Soviet leaderships, and demonstrate that her untimely death served as a temporary impediment for further development of diplomatic relations on a citizen-to-citizen level. The former may also shed light on the sudden decision to designate another youth ambassador, Katya Lycheva, to replace Samantha Smith, thus sustaining a communication bridge between the two adversaries.

Communism has fallen, the Iron Curtain has been successfully demolished, ideological contradictions can no longer be blamed for all that remains lost in translation and transition, but the core misunderstandings between the people of post-Soviet Russia and the West as a whole persists—perhaps more so now than at any other time since the end of the Cold War. The reluctance to understand—let alone accept—the “other” continues to dictate U.S.-Russian relations, causing a wider divide between the two countries. In this prolonged state of winter coolness dominating the hearts and minds of both states and their respective citizens, cultural diplomacy with all of its restrictions and limitations may (re)create just one but nonetheless an important channel of communication between the adversaries.

Instead of viewing Track Two diplomacy as a replacement for or an impediment to traditional diplomatic and political tools, we must instead see this process as one that is designed to assist official leaders to find ways to, if not resolve, then at least mitigate brewing conflicts. By allowing citizens to engage with each other and rebuild bridges where political talks are otherwise doomed to fail can provide a healthy and fruitful platform for cultivating renewed channels of communication that for the time being remain closed.

* This material was partially presented by Tinatin Japaridze at the Association for Slavic, East European, and Eurasian Studies (ASEEES) Convention on December 6, 2018, and the IMEMO/Harriman Institute Young Analysts Conference at Columbia University on February 1, 2019. Neither this article nor its excerpts had been published until now.

[xiii] Ilana Feldman and Miriam Ticktin, eds., In the Name of Humanity: The Government of Threat and Care (Durham: Duke University Press, 2010), pp. 72-73.